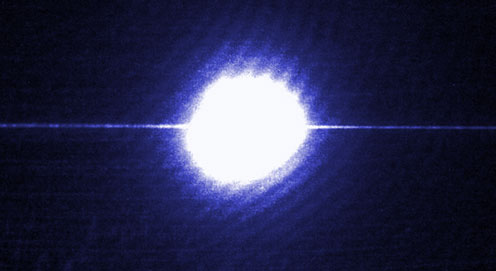 In the Nanofiber group we use measurements at the quantum level to prepare interesting quantum states in ensembles of laser cooled atoms. The non-classical correlations among the states of the individual atoms (entanglement) allow us to use these special quantum states for quantum-communications, quantum memories and quantum metrology (precision measurements).

By trapping atoms within the evanescent light field of on optical fiber thinner than a light wavelength, we achieve strong interactions between the light guided by the fiber and the atoms. We explore how this system can be used to develop quantum measurement strategies and to engineer quantum states that are useful for precision measurements and quantum information.

Starting from a conventional optical fiber, we pull on both ends while we heat its center in an oven. Here the fiber diameter decreases to 500 nm, creating a tapered optical nanofiber [1]. In such a thin fiber, a large fraction of the light power is guided outside along the fiber surface as an evanescent wave, rather than within the glass only. This light is used to trap a atoms only 200nm from the fiber surface [2]. Light entering the fiber ends is concentrated to a small cross-sectional area so that a single photon produces a large field strength. Therefore, only a few atoms lined up in its path are sufficient to ensure its absorption and an optically dense ensemble of a few thousands atoms, homogeneously coupled to a single light mode is formed.

By measuring the phase shift with a light color that is only weakly absorbed, we can probe this electronic state without exciting too many atoms, so that the measuring process itself effectively does not change the measurement outcome (that's the “quantum non-demolition” property). In fact, in previous experiments [3, 4], we also demonstrated that for atoms coupled very strongly to the probe light, such dispersive measurements can be “non-destructive” as well, i.e. quantum coherence properties and entanglement amongst the atoms are also preserved.

Not only are these non-destructive QND measurements used for state characterization, but they can also create exotic quantum states [3, 4]; we are working towards the generation of spin-squeezed and non-Gaussian collective atomic states. Such highly entangled states are of fundamental interest and a powerful tool for the implementation of future quantum networks and quantum information processing.

Over the past decade atomic ensembles have pushed the boundary of measurement precision, resulting in extremely precise measurements of time [5, 6] and record magnetic field sensitivity [7]. Currently, we are investigating on how to use an atomic ensemble trapped around a nanofiber as a field sensor with a high lateral resolution (<< 1 µm).

Optical atomic clocks are among the most precise instruments in human history [5, 6] Their “tick” is based on measuring the frequency of light that drives an ultra-narrow optical transition in an ensemble of cold atoms.

A standard technique to compare the frequency of a reference oscillator with the atomic frequency is Ramsey spectroscopy.

In contrast to classical 2-state systems (like bits) a quantum system can be in an arbitrary superposition of both states.

We want to compare the frequency of our reference oscillator ν osc   with the atomic transition frequency ν clock   using microwave pulses and measurements.

In the operation of these state-of-the-art clocks the quantum projection noise, originating from the quantum fluctuations of uncorrelated atoms of the clock plays an important role.

We have pioneered th use of Quantum nondemolition measurements (see above, [3]) to create quantum correlations between the clock atoms and in this way reduce the projection noise and increase the precision of the clock beyond this quantum limit [8].