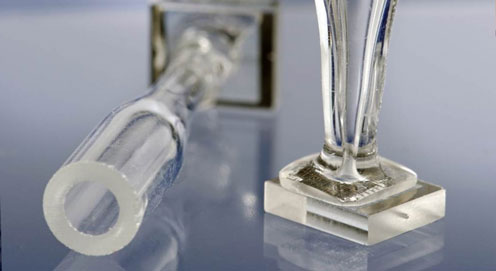 Low temperatures are usually required for quantum information processing because otherwise quantum states can be easily destroyed by collisions and other dissipation processes. We use spin protecting alkene coatings for the cell walls which preserve spin coherence of alkali atoms at room temperature for up to a second despite thousands of wall collisions.

EPR entanglement, introduced by Schrödinger and discussed by Einstein, Podolsky and Rosen in their famous paper in 1935, can be described as non-local quantum correlation between two subsystems. We have demonstrated entanglement between two macroscopic objects: two ensembles of Cesium atoms contained in separate glass cells. In our lab, entanglement has been created by a quantum non-demolition measurement in 2001 [1] and more recently a steady state entanglement was created using dissipative processes [2].

Using entanglement, information encoded in two non-commuting variables which cannot be measured simultaneously, can be sent between two parties, Alice and Bob, in a secure fashion. In our 2006 experiment [3], information encoded in light was teleported into the atomic spins. More recently in 2013 [4], a quantum state was teleported from one atomic object to another over a distance of 0.5 meters.

Tiny magnetic fields can be detected by sending light through atoms whose magnetic moment (spin) reacts to the field. We have achieved sub-femtoTesla magnetic field sensitivity with a cm-sized atomic ensemble, and used entanglement to improve the sensitivity of our atomic magnetometer [5]. Currently, we are developing smaller magnetometers (100 um size) useful for detecting magnetic fields with much higher spatial resolution for bio- and medical applications.