Establishing control of physical systems to the levels required to reach the so-called quantum regime is an ongoing effort in experimental quantum mechanics. From single photons and atoms to mesoscopic superconducting and mechanical devices - to name a few - the breadth of systems under study around the world grew bigger and bigger over the past decades. Along with theoretical understanding of the systems, the control toolbox for each and every system evolved with time, and it became more clear that no single platform would be suited as a general hardware for the vast amount of tasks quantum devices are potentially useful. Bringing together the best from different physical systems into a single entity can potentially overcome many hurdles faced by the individual constituents, allowing the development of technologies as well as understanding the extent of the quantum world.

In our experiments, we interface a cesium ensemble spin oscillator with a nanomechanical oscillator via light. By combining concepts as quantum backaction-evasion [Nature 547, 191 (2017)], ultracoherent phononic crystal membrane [Nat. Nanotechnol. 12, 776 (2017)], and coherent noise cancellation [PRL 121,103602 (2017)], we study the quantum enabled link in between the collective spin of the cesium ensemble and the center of mass motion of the nanomechanical device. 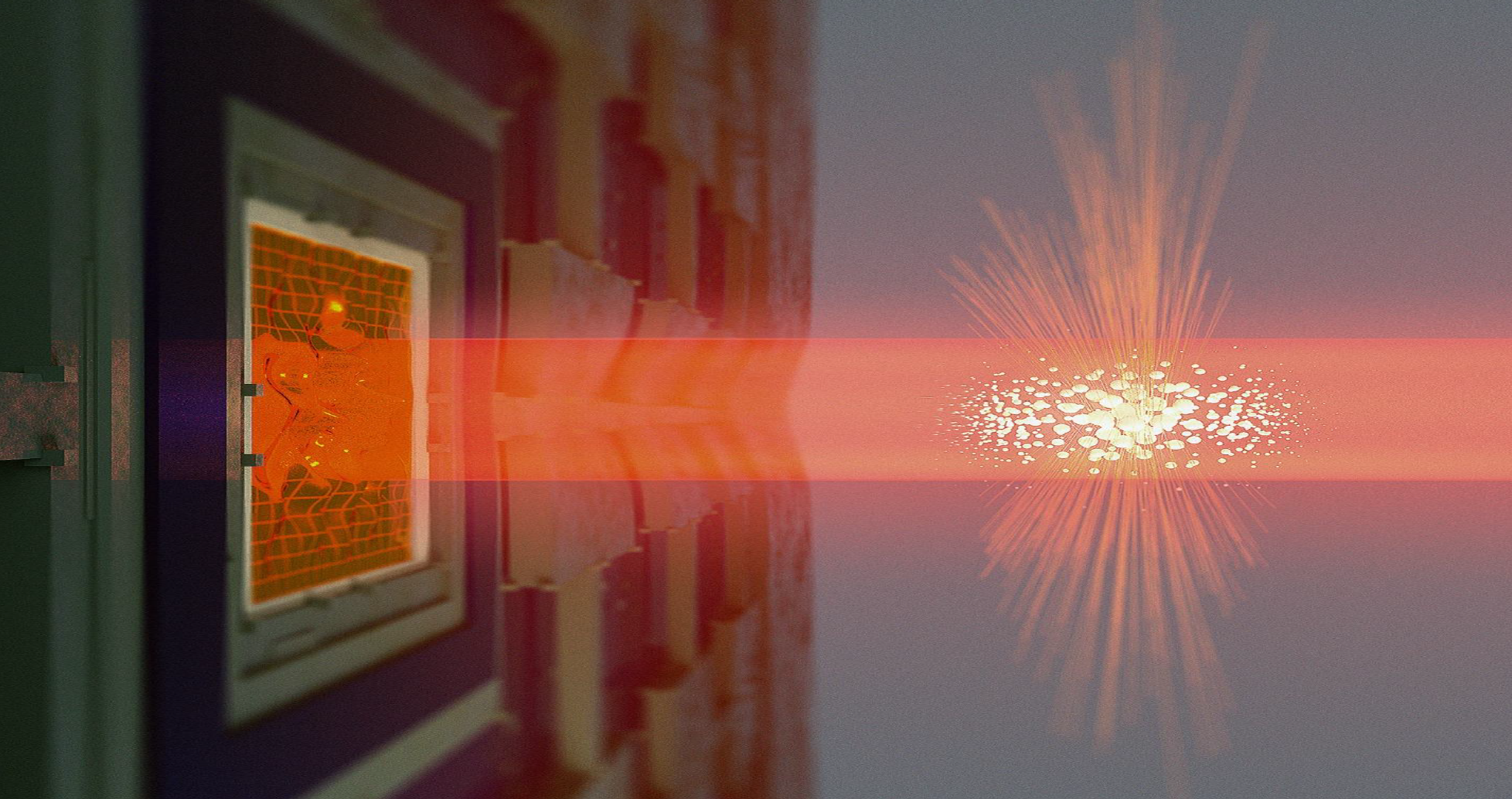 A central concept to our experiments is the spin oscillator with effective negative mass. When you push, i.e. exert a force on, a normal object, it accelerates in the direction of the force. By optically pumping the atomic ensemble in our system to the highest energy state of the ground state manifold, we effectively tailor the atomic system to behave as if it had a negative mass: the spin moves in the opposite direction of the effective force from the light we use to probe and manipulate it. The effective negative mass of the atomic spin system and the positive mass membrane, when probed together, are insensitive to the disturbances from the light probe (the back action).

The atomic ensemble used in the experiments is based in a warm cesium vapor. The vapor is confined to a glass cell (see picture). The vapor cell is coated with an anti-relaxation material, allowing for atoms to bounce off the glass walls without changing its internal quantum state. In our experiment, we have tailored the cell geometry to confine the atoms to a small channel, allowing a fast readout of the spin state. 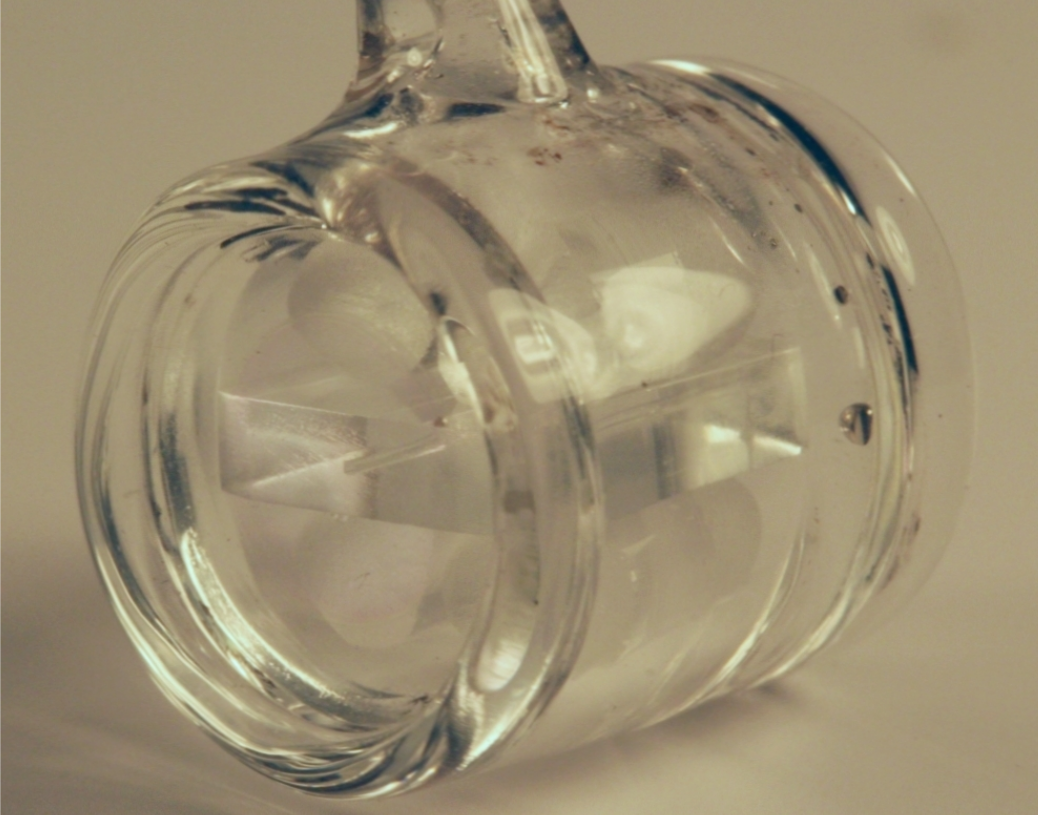 The spin oscillator is prepared in the ground state manifold of cesium by optical pumping. A far detuned laser probes and induces quantum back-action disturbances in the oscillator dynamics.

We have developed membrane resonators that are shielded from detrimental effects of the environment. Over the years, various designs and structures have been utilized, see picture. Initially, the design involved the patterning of the membrane frame into a ~cm long silicon bridge whose structure is periodically modulated. The development of a soft-clamping technique [Nature Nanotechnology, 12, 776 (2017)] that integrates the frame in the membrane structure, allowed decoupling the target mechanical mode from the external environment even further. The acoustic dispersion of the bridge thus exhibits a full phononic bandgap [Nature 503, 209 (2013)], in which the propagation of acoustic waves is strongly suppressed. Matching this gap with the membrane’s vibrational frequency leaves us with very clean, unperturbed membrane modes.

When dealing with quantum systems, we must keep in mind that the act of measurement disturbs the system under observation. The consequences of this disturbance are fundamental, limiting the precision that a given observable can be measured. The effect of the measurement device - the light - on the system - a mechanical oscillator, for example - is called quantum backaction.

As mentioned above, our hybrid setup realizes a setup for cancelling this extra noise, imprinted on the system by the readout. The results were reported in [Nature 547, 191 (2017)]. The measurement quantum backaction is a major limitation on the detection of gravitational waves [Phys. Rev. Lett. 116, 061102, 2016], as quantum backaction arises from the perturbed mirrors in each interferometer arm, an equivalent interaction to the membrane of the hybrid system.

The sequential readout of the two subsystems can also be utilized to prepare the two subsystems in a joint quantum state, where the two subsystems cannot be described without direct reference to the other. This inseparable, or entangled, state was created in our system and reported in [arXiv:2003.11310]. The combination of ultraprecise measurements, advanced filtering and the backaction evasion explained above, allowed us to measure the combined motion of the two oscillators below the ground state uncertainty of the individual systems, thereby showing quantum correlations and variances below the entanglement bound.

We are currently (Summer 2020) working towards implementing a teleportation protocol in the setup, where the quantum state of one system is mapped onto the other, with a precision greater than that allowed with a classical description. This is relevant for applications of the hybrid system in quantum information protocols, allowing for example one system to serve as a quantum memory and the other as the interface to either an optical communications channel or a quantum bit, the smallest component of a quantum computer.