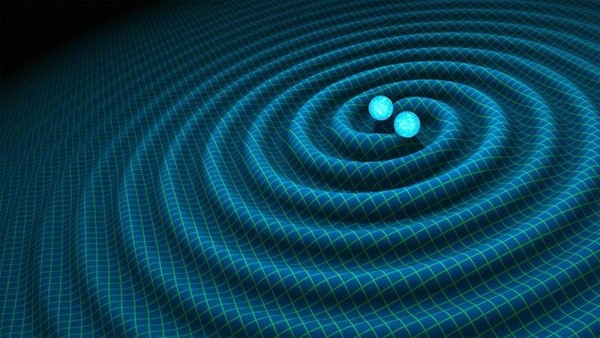 We work in the enhancement of interferometric measurements beyond the standard quantum limit. Our target systems are interferometers used as gravitational wave detectors (GWDs), such as LIGO and VIRGO.

In interferometers used to detect gravitational waves light monitors the motion of large mirrors that are driven by space-time ripples generated by cosmic events such black hole collisions [1]. The scale of displacement generated by GWDs required extreme levels of sensitivity reaching the limit where quantum effects matter.

From the basic laws of quantum mechanics, the continuous measurement of one variable imposes random disturbance in the system been measured, this effect is called quantum back-action (QBA). In GWDs measurements the motion sensitivity is dominated by the phase shot noise of light at high frequency. However, if we try to reduce light phase fluctuations it increases amplitude noise, which is the origin of the position QBA noise at low frequencies. This is due radiation pressure noise coming from the interaction between light and mechanics. We are faced with a quantum originated short blanket problem called standard quantum limit (SQL). 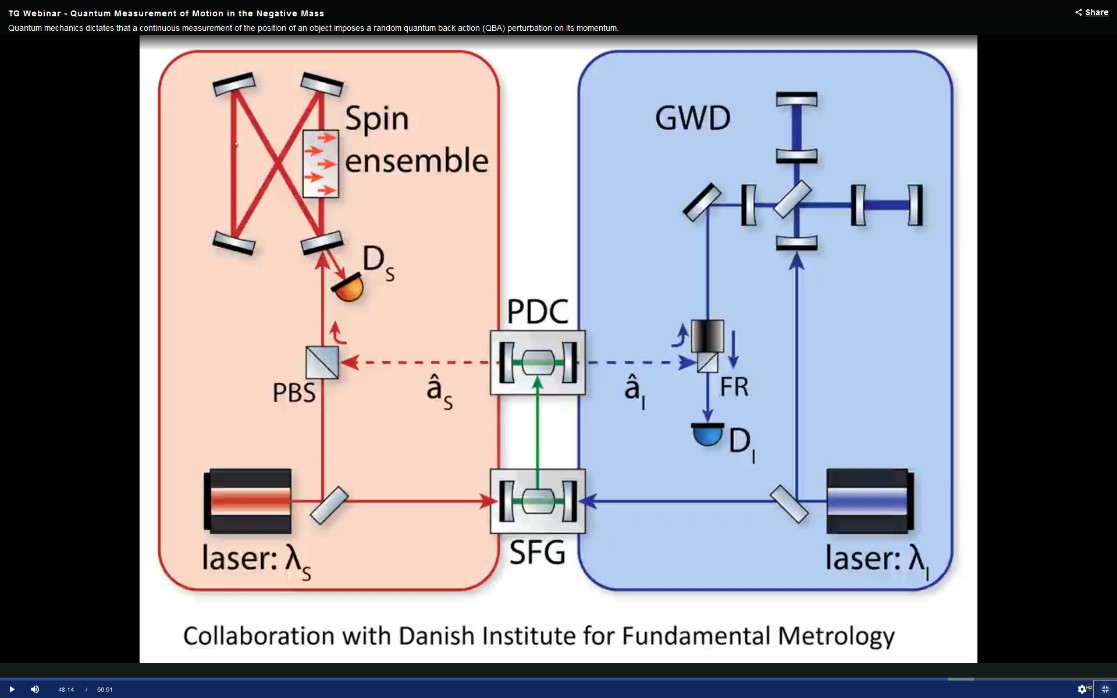 In 2018, Eugene Polzik and F. Y. Khalili proposed to enhance the sensitivity of gravitational wave detectors beyond the SQL by measuring the signal in relation to a negative mass reference frame [1,2]. Calculations show that broadband sensitivity improvement can be achieved with current technology. It follows from these results that the proposed scheme allows to achieve a sensitivity gain about 6 dB across the entire sensitivity band of interest (< 1KHz), which corresponds to almost an order of magnitude gain in the “visible” part of the Universe and a proportional increase in the event rate.

We use an optical parametric oscillator (OPO) to generate the quantum entangled light used as link between the interferometer and atomic spins. 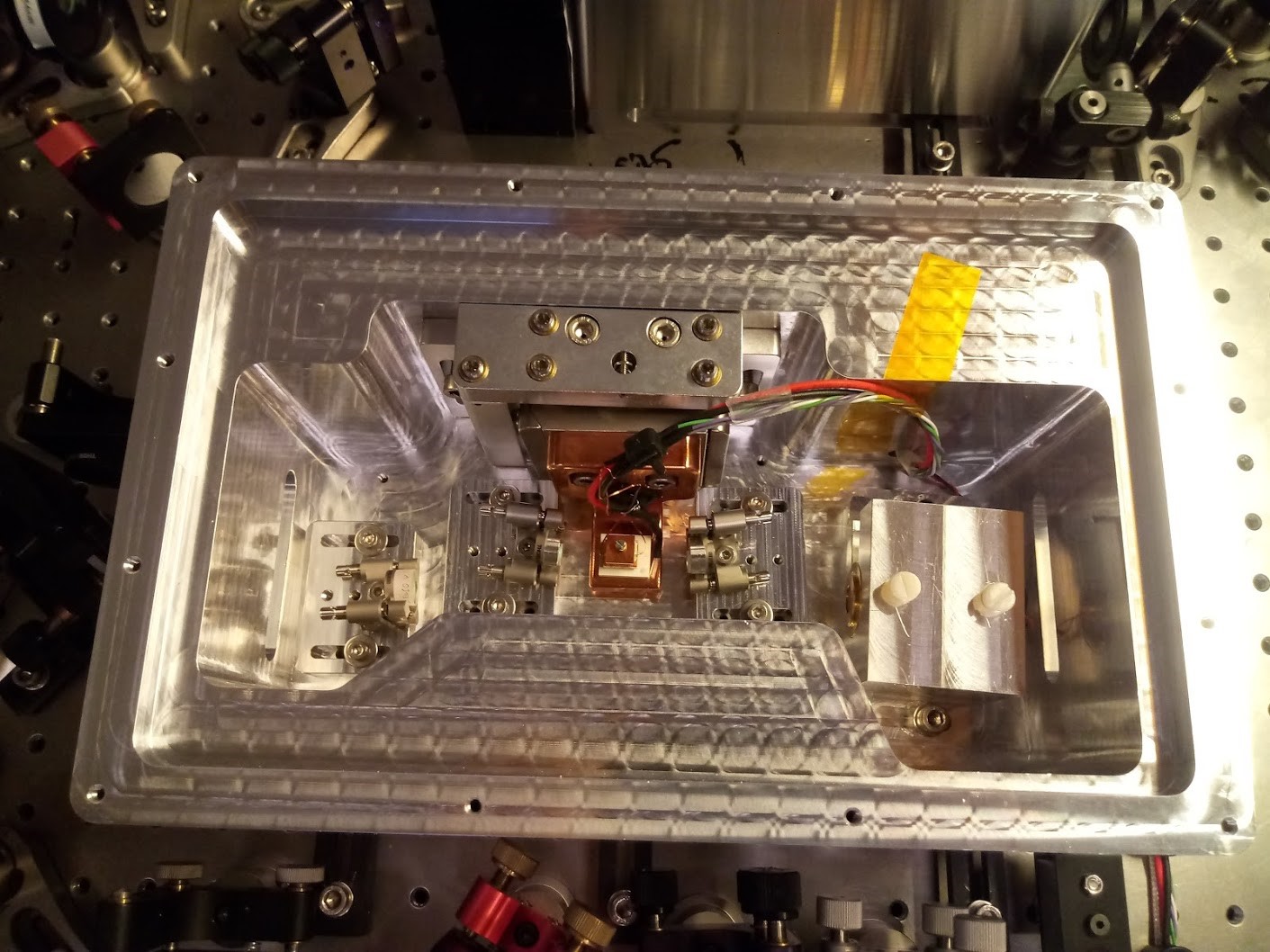 The OPO works in order to give entangled light at 1064 nm and 852 nm via of spontaneous parametric down conversion process inside an optical cavity. The OPO output beams quadratures present the same “spooky action at a distance” once phrased by A. Einstein [3,4]. For high quality quantum correlations to be produced and detected low loss optical components and high quantum efficiency light detectors should be used together with precise control of the system parameters and reduce noise coupling with the environment. This is a special challenge in the low frequency range, requiring ultimate understanding of each part of our setup. 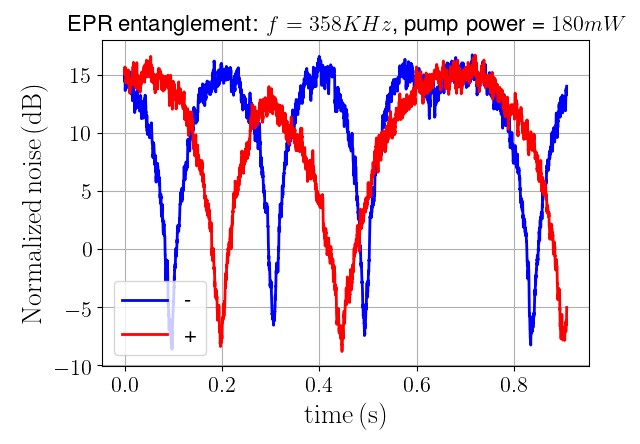 We have already created high quality entanglement at relative low frequencies in our lab and are working to improve the light source and detection.

In QUANTOP most of experiments are conducted using a macroscopic collection of Cesium atoms forming an atomic spin ensemble. The ensemble is characterized by a collective spin state with long coherence times [5]. In real life the system is a glass cell filled with cesium vapor. To maintain high measurement strength and generate a high-quality spin oscillator we are working with ~ 80 mm long cells. This demands high quality homogeneous magnetic fields and optimum optical pump to prepare the low frequency oscillator that is going to be used as our negative mass reference frame. 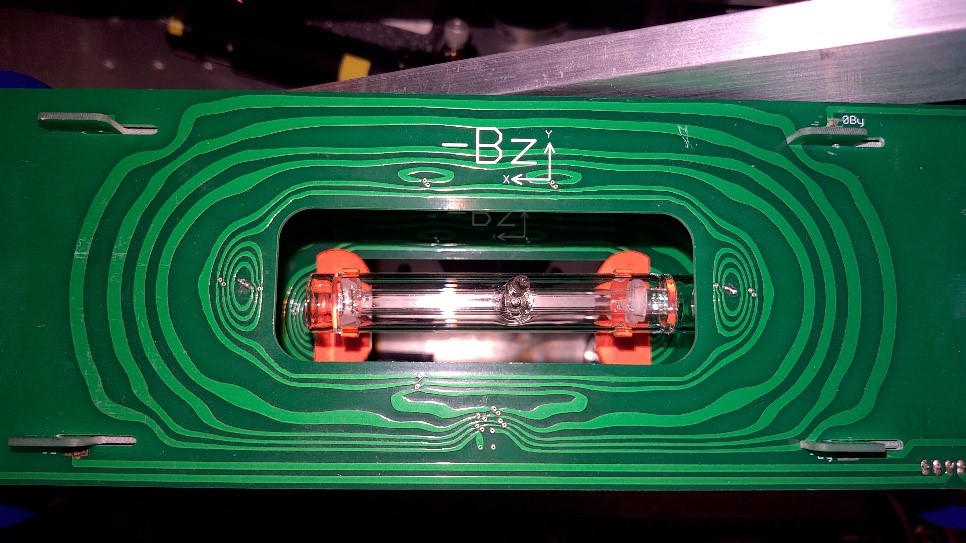 After characterizing each system independently and make them reach the required parameters we will be ready to implement the proposal in the laboratory. 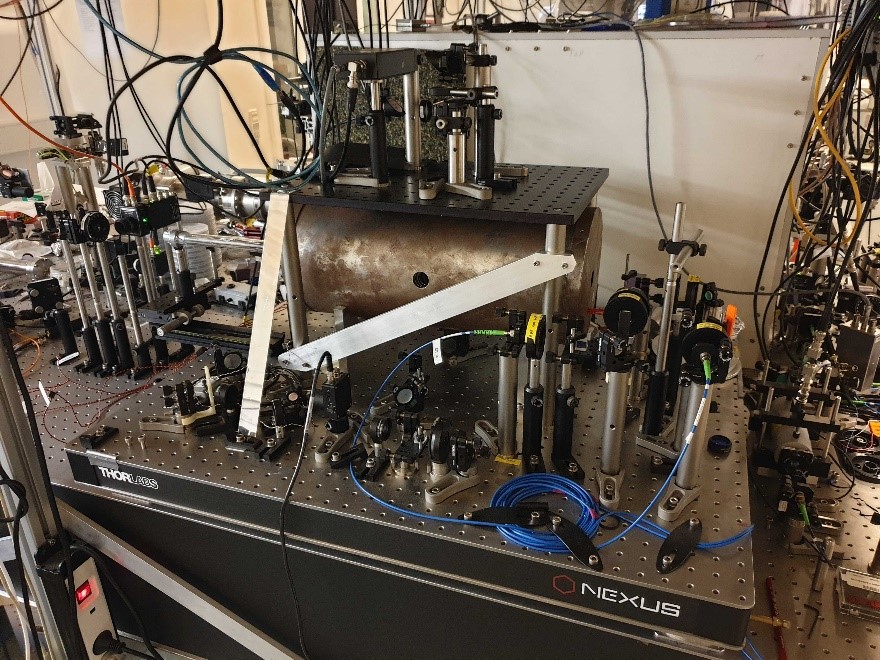