The uncertainty in population difference measurement originates from independent atoms either being projected into the ↓  or ↑  state.

We can reduce the phase uncertainty by introducing quantum correlations among the atoms. This can be done in many ways; our method is most suitable to improve the precision of atomic sensors and is based on Quantum Non-Demolition-measurements.

The QND measurement is done with laser light passing through a Mach-Zehnder interferometer, one arm of which interacts with the atoms, while another arm serves as a reference arm. The interferometer measures the phase-shift of light that interacts with the atoms. The refractive index of the atomic cloud depends on the atomic state and by measuring the difference in refractive index for two carefully choosen light colors we can measure ΔN=N ↑ −N ↓   . 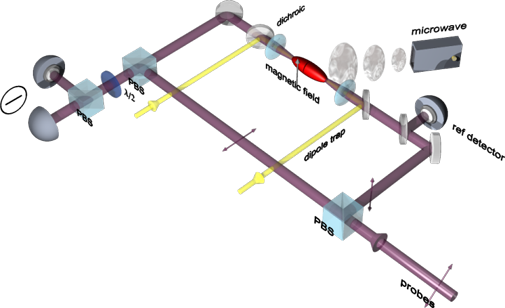 Naturally, the atoms also absorb light, which is an unwanted interaction. Because of this the number of photons to probe the atomic state is kept so low that the measurement precision is limited by the optical shot noise.